Due to a near fatal car crash & unable to move, ex stand-up comedian & Elvis impersonator Sidney Meadows now resides in a nursing home needing 24hr care. Sidney's brother George & his avaricious wife Gloria come to visit.
George has his reasons for wanting to keep Sidney alive.
Gloria has her reasons for wanting him dead & has the perfect plan to kill him.
They argue bitterly. Shocking truths are revealed
Bitterness and love exposed, including the truth behind Sidney's accident.

Is Sidney just a 'Vegetable in a chair' (as Gloria calls him) or does he comprehend all that is going on? Who will have the final decision on Sidney's fate?
A strong one act play for 2M 1F 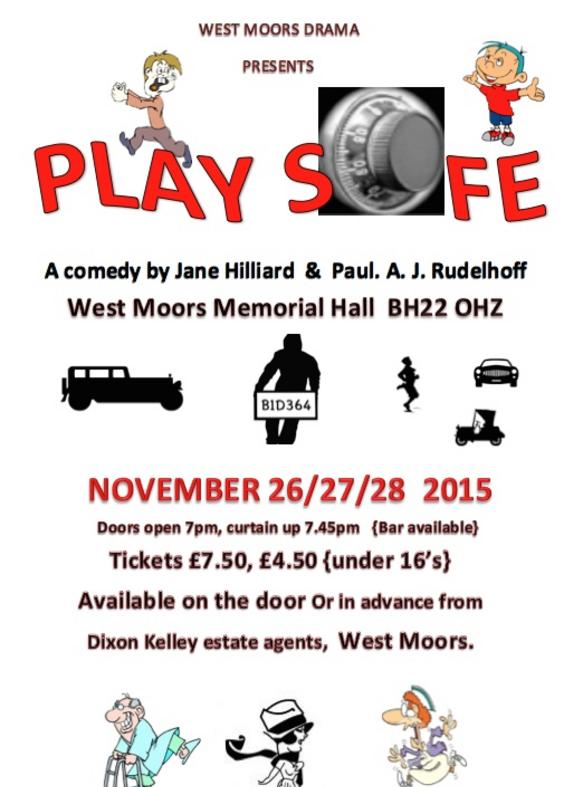 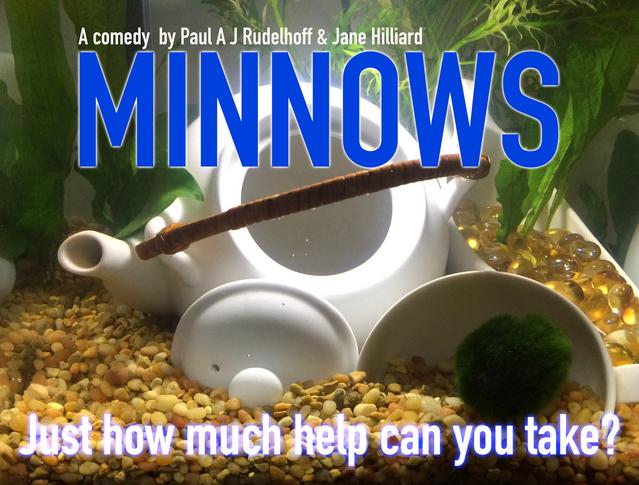 Ronnie 'Riviera', hardened criminal and well  known figure in 'The Underworld', has written his autobiography.

It promises to be a best seller but Ronnie is keeping it's contents close to his chest until the release date. However, he agrees to one interview. 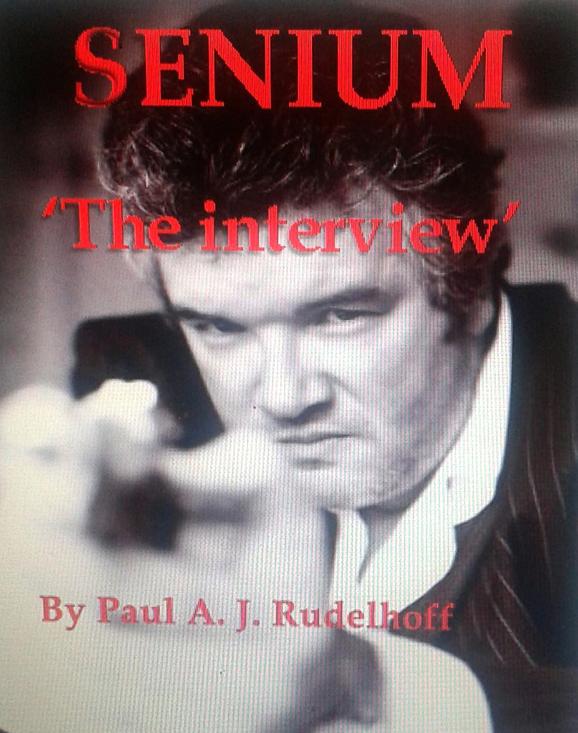 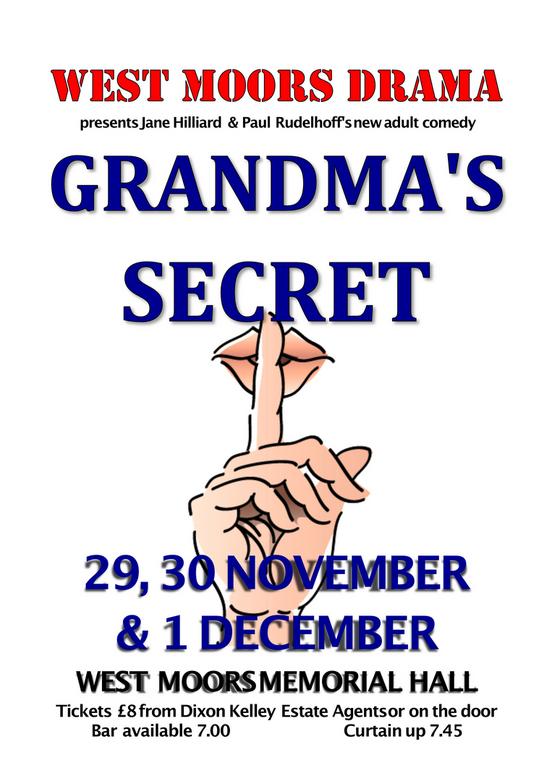 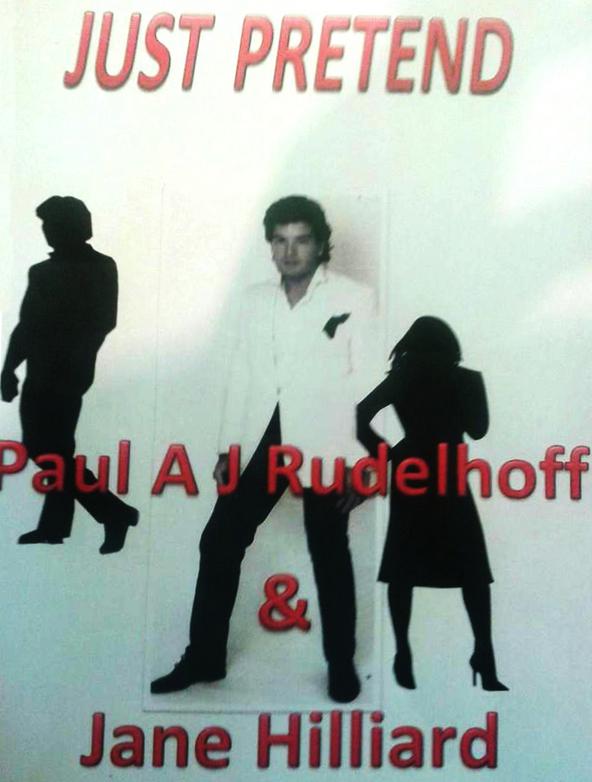 A comedy in two acts set in the kitchen of a crumbling stately home. A collection of ex Olympian friends from around the world who gather together for a reunion every Olympic year wherever the olympics are held.

This year it is Sir Humphreys turn to host despite the fact that he is blissfully unaware that he has no money and his home is crumbling around him he carries on regardless with hilarious results! Script available from lazybeescripts.co.uk 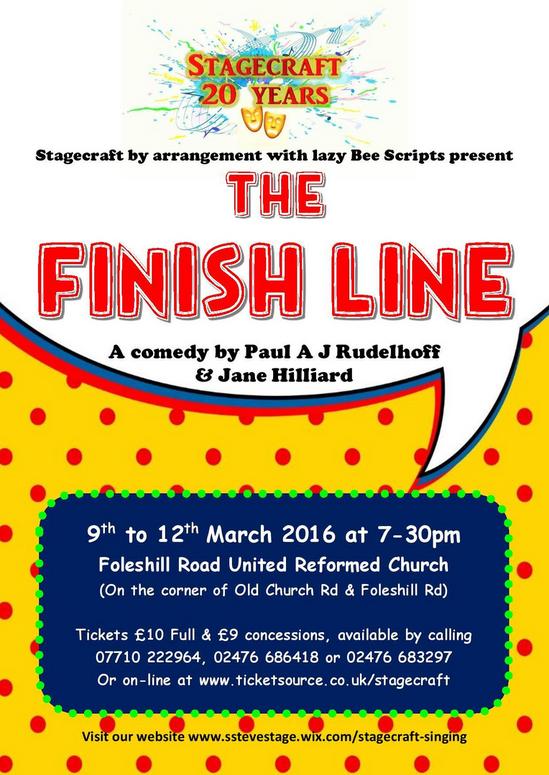 Take two bumbling crooks planning ‘a job’, an old fashioned tea room and a bunch of enthusiastic, pensioners determined  to help  and you have the scene for a funny one act  comedy written by Paul A J Rudelhoff & Jane Hilliard.

Review and synopsis by SCENE one plus

The splendid West Moors Drama Society is a local institution. It has been presenting grassroots theatre productions since 1957, mostly performing light comedies and occasionally serious plays. Each year the Society normally puts on two productions and continues this tradition with the new play Grandma’s Secret, written and directed by talented local playwrights Jane Hilliard and Paul A J Rudelhoff.

This enjoyable play has all the hall marks of the time honoured “Farce” – stereotyped characters, making use of exaggerated and improbable situations with a generous helping of silliness – all designed to be entertaining and make the audience laugh!  A certain Mavis Davis is the Grandma with a secret who, with the help of her friends Hilda and Harry, has been writing bestselling books in the style of 50 Shades of Grey under the assumed name of M S Dias Viva (an anagram of Mavis Davis). So far she has managed to hide her identity from her family and the public. Mavis is now writing her very last book and with the deadline approaching she needs to be in her own home putting the finishing touches to the final chapter. Her family, however, have other ideas and have arranged for her to go into a nursing home for the Christmas period whilst they are on holiday. Mavis hatches a plan to send her somewhat batty and forgetful friend Esme to the nursing home in her place. Hilda and Harry arrive to assist with the writing and testing of the adult toys that feature in the books, but their plans are thwarted as Mavis’ grandson has turned up at the house thinking it will be empty and planning a party for his mates. To add to her problems, someone has leaked her address to the press and a journalist is on the way to expose Mavis and her double life. As if this wasn’t enough to be going on with, her sister turns up with estate agent Roland Wagstaff and a burglar also puts in an appearance – known locally as the ‘wrinkly robber’ owing to his advancing years, and a modus operandi involving cooking himself a good meal rather than removing items of value!

The results, which are predictable in the way that farce is meant to be, were satisfyingly funny and amusing from beginning to end. The performance romped along and the timing and dialogue flowed well. The audience were fully engaged in the performance with laughter aplenty at every innuendo, double entendre and malapropisms.


West Moors Drama chose a comedy for its latest production but not a familiar farce as this was written by experienced player and previous director Jane Hilliard, together with Paul A J Rudelhoff. They created a very funny play.

The action takes place in a home for retired entertainers (a splendid set which complemented the storyline) where the residents endeavour to relive their television roles. Into this world of eccentricity come a couple of likely lads on community service. They are not what they seem to be and  pandemonium ensues as the story unfolds.

Fairlawn is run by Lance Kennedy who was previously a game-show host and Peter Wright does a good job with the part. Matron, his wife, is well characterised by Shelagh Rundle with the forceful voice and persona of a real battle-axe. Completing the staff is domestic help Carina and Joan Harrison impresses as she cleverly makes this pivotal role her own.

Miriam Maplethorpe, previously a television detective, is ideal for Anne Maynard who is delightfully dotty. She is a perfect foil for Peter Legrand – the capable Alan Dester – who recalls his career as a Shakespearean actor and quotes the Bard at every opportunity. Another resident remembering his glory days is Charlie Chuckles (West Moors Drama stalwart Derek Kearey) and his first appearance unclothed except for a blanket brings the house down.

Neither Florrie Fortuna – Jeanie Ellis is admirable – or Mavis Fulbright (the multi -talented Jane Hilliard) are as mad as they originally seem, revealing secrets as the plot thickens. Teenage brothers Ben - well played by Alex Willmott - and Lee (Tom Clifford shows promise) are not in Fairlawn to pay their debt to society and the boys are vital to the intrigue. This pair are making their debuts with the group and will, hopefully, continue to gain confidence and learn from experienced actors.

Tom Martin directed and produced, he must be congratulated for keeping up a fast pace and using the cast to their best advantage. Also taking the cameo role of Barry the Brain, he epitomises the spirit of amateur theatre so look out for West Moors Drama productions in the future.

Play Safe continues until Saturday, there may be a few tickets left but don’t delay if you want to see an original comedy.